Since 2018, Critical Writing has worked with the Summer Undergraduates Minority Research Program (SUMR) students on a health-related, research-based, real-world writing project. The six-week SUMR program is sponsored by the Leonard Davis Institute for Health Economics at Penn, and overseen by its founding director, Joanne Levy. SUMR provides mentorship and intensive instruction for students from populations underrepresented in the health professions.

"My experience working on this white paper was unmatched," said SUMR Scholar Sona Fokum, whose group wrote on the opioid endemic as experienced in the Kensington section of Philadelphia. "The research, teamwork, and final recommendations helped me strengthen my public health mindset. I will forever cherish the interviews we had with residents and activists from Kensington because they taught me so much about how the opioid crisis affects the neighborhoods on an individual level. I hope this paper can serve as a model for positive changes and solutions, not only in Kensington, but everywhere the opioid epidemic has devastated."

A biography of the authors of this project, including Sona Fokum, is provided below, along with the white paper they produced. 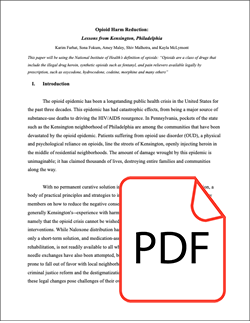 "Opioid Harm Reduction: Lessons from Kensington, Philadelphia," by Karim Farhat, Sona Fokum, Amey Maley, Shiv Malhotra, and Kayla McLymont, examines the city's use of the "harm-reduction," approach to mitigating opioid abuse with "a practical principles and strategies to inform clinicians, policymakers and community members on how to reduce the negative consequences of opioid use." The paper assesses the concept critically, covering both the advantages and drawbacks to harm-reduction models such as Naloxone distribution, supervised injection, needle exchanges, and medication-assisted treatment.

"Without a comprehensive community-oriented approach," the authors write, "including housing options, targeted nonviolent police intervention, and criminal justice reform, the opioid crisis will only grow. This is not a crisis confined to Kensington. It reaches deep into the heart of the U.S., cutting across racial and cultural lines. By sharing insights from one of the most hard-hit neighborhoods in the country, we hope to educate both the wider Philadelphia community as well as other communities about what can and should be done."

Karim Farhat is a rising senior at Cornell University majoring in Economics while also following a Pre-Med track. After living in Lebanon for over a decade, Karim became interested in providing health care access to oppressed and impoverished communities, particularly how universal health care could contribute to ending the “deaths of despair” epidemic. After graduation, Karim hopes to attend medical school and pursue a career as a community-oriented physician advocating for more a holistic approach to health care.

Outside of academics, Karim is a part-time EMT in Brooklyn, NY, transporting patients throughout the pandemic. At Cornell, Karim is president of Cornell Arab Students and is the head economic analyst for the biomedical engineering project team, Cornell DEBUT. In his free time, Karim enjoys reading French and Russian literature, watching classic movies, working out, and following the sport of Strongman as well as his beloved New York Knicks.

Amey Maley is a junior at Rice University majoring in Statistics and minoring in Poverty, Justice, and Human Capabilities. Having gained wide exposure to rural and urban health care settings ranging from Texas to his home state of Illinois, he is interested in pursuing a career in healthcare within the realm of clinical practice as well as impacting health systems more broadly.

With past experience volunteering at a needle exchange in Chicago and a vested interest in substance use disorders, this White Paper was a worthwhile avenue to explore the nature of the opioid epidemic through a new lens. Moreover, collaborating on this work provided a valuable opportunity to think critically about the historical and sociodemographic precedents that shape the state of Kensington today through the eyes of community members.

Sona Fokum a senior majoring in Public Health and double minoring in Biological Sciences and Chemistry at the University of Illinois at Chicago (UIC). She is deeply passionate about bridging the health access gap rooted in systemic racism, classism, and gender inequities that burdens vulnerable communities. She hopes to use her experiences at SUMR to aid her in her future pursuit towards a dual MD-MPH degree.

At UIC, Fokum is a Presidential Awards Program Scholarship recipient through the Honors College and president of the UIC American Society of Molecular Biology and Biochemistry (ASBMB). She is also on the leadership council for Peer Health Exchange and a Peer Success Coach through the African American Academic Network. As a self-taught hair and makeup artist, she loves playing with different hairstyles and makeup looks on herself and her friends in her free time.

Shiv Malhotra is a second-year undergraduate student at the Sophie Davis School of Biomedical Education /CUNY School of Medicine, where he is majoring in Biomedical Sciences. He is originally from Cincinnati, Ohio and is interested in the intersection of economics and healthcare, particularly as it relates towards healthcare disparities and payment models. Shiv is passionate about delving more into the intersection of economics and healthcare to improve both the the accessibility and quality of health care given in order to better serve patients financially and clinically in the future.

Kayla McLymont is a senior at Brown University concentrating in Public Health and pursuing a Master’s in Public Health. She is originally from Tampa, Florida, and is particularly interested in how meditation mindfulness can elicit behavior change among marginalized populations. After graduation, Kayla plans to attend medical school and become a physician who mitigates health inequities in low-income and minority communities.


Back to Marks Family Center for Excellence in Writing